Newsbrief: Anything but numbers is open for discussion

The French have been worrying for several weeks about the soaring prices of natural gas and electricity. They are right. These hikes have a common cause: the sharp increase of gas prices on the world market, which impacts not only gas consumers, but also electricity consumers.

The price of gas increased from less than 15 €/MWh in September 2020 to almost 60 €/MWh during September 2021 and has continued to increase between the end of September and the beginning of October to reach 108 €/MWh in Rotterdam on October 6th!

This means the gas price was multiplied by a factor 4, then 7, within one year; it is completely insane! The main reason for this is the booming demand for gas worldwide, particularly in Asia, which is outbidding LNG (liquefied natural gas) deliveries initially intended for Europe and buying it massively from producer countries, including the United States. This is taking place in the context of a global shortage of supply: supply from Europe, mainly from Norway, is no longer on the increase because reserves are running out. As for Russia, it is in no hurry to open its gas valves further, although it could do so. Europe is thus in a vise between competition from Asian consumers and gas supply shortages. According to energy market experts, given the onset of winter which should greatly increase the demand for gas, a lasting price downswing is not to be expected, at best, before next spring.

Why does the price of gas affect the price of electricity so much? This is due to the workings of the wholesale electricity market in the Western European zone, which includes France and its close neighbors. The spot (day-to-day) price on the wholesale market is determined by the production cost of the most expensive means needed to meet the demand. Now, as soon as there is no sun or no wind in a part of Europe, gas-fired power plants must be massively activated to meet the demand for electricity. And as these power plants use gas whose price, multiplied by 4 to 7, accounts for three quarters of the cost of the electricity produced, the price of the latter is multiplied by 3 to 5! To this must be added the price of the CO2 emitted by these power plants, which approaches €30 per MWh produced.

As a result, the spot price of electricity in France rose from an average of €50/MWh at the beginning of 2021 to €160/MWh on September 11, 2021, as shown in the graph below (“SPOT price on the French market”). It then continued to rise at the end of September and beginning of October to reach about €260/MWh, with even higher spikes in other European countries (United Kingdom, Spain, Germany, Northern Italy...) where market prices reached or exceeded €400/MWh to €500/MWh at times! 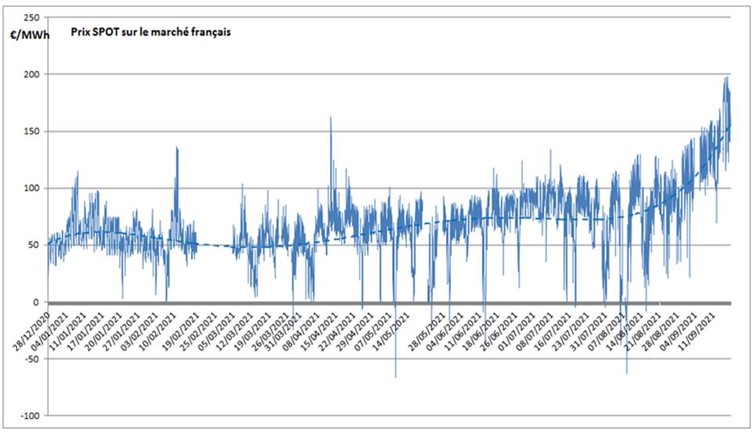 Moreover, these two means produce electricity at extremely competitive prices that do not exceed 50 €/MWh (the Nome law even requires that a fourth of the nuclear production be sold to electricity retailers at 42 €/MWh, a real plundering of its producer). It was, in fact, to shield France from the fluctuations of fossil fuel prices (oil at the time) that the French nuclear fleet was first launched: but time has taken its toll and this wise and prudent approach to energy independence has been sacrificed on the altar of European liberalism, which, with its "all market" ideology, is sending France back into dependence on fossil fuel prices, now gas. This is a major backward step, all the more unfair that French consumers are footing more expensive bills to cover the cost of CO2 emitted in neighboring countries.

It is urgent to draw conclusions from this aberration, which clearly shows that to do away with nuclear power or to reduce its production would be to submit to the prices of gas and of CO2, both being on the increase over time. Not to mention the fact that the European Commission's  "all wind and photovoltaic power" policy will entail a significant increase in the use of gas, which will be essential to compensate for the fluctuations and shortcomings of these intermittent sources. This, then, would be a triple penalty: submission to uncontrollable electricity prices since they are determined in other European countries; submission to increasing amounts of an electricity whose price is indexed to the price of gas, the amounts being also uncontrollable because these are generated in other European countries; major loss of energy independence.

It is high time that public opinion understand that there is no other solution than to persist in the nuclear option at a substantial level to avoid paying a considerable price for electricity and for all the electricity intensive goods and services. This is a major standard of living issue that adds on to that of climate change mitigation.

France must sacrifice neither the quality of its electricity supply, nor its energy independence, nor the competitive advantages it has acquired while ensuring an excellent climate performance that is still perfectible but that is one of the best in Europe.

It is urgent to reform the way the European electricity market operates as it has become insane. Among the possible solutions, reverting to the subsidiarity of each country is a must. This implies:

But is the European Commission still capable of reappraisal and of reforming what needs to be reformed in view of the evidence, which in this case proves catastrophic? Can it, in particular, understand that the "market God" cannot apply to electricity generation, a fact that serious economists are well aware of? Both the United States and the United Kingdom, although proponents of competition and pioneers in this field, are pragmatic; they have drawn back and reintroduced some non-market regulations.

The situation is all the more serious that these already unsustainable electricity prices are emerging at a time when demand is still moderate. What will happen when demand rises sharply in winter, thereby increasing tensions on the gas market and most probably its price? Worse, in the longer term, with its "all wind and photovoltaic" and "market God" ideologies, the European Commission is in the process of destroying the European electricity system if no action is taken.