Energy in all its forms is an essential element of life in our societies. However, along with the many benefits it provides, every stage of its implementation has negative repercussions.

At a time when a growing sensitivity is developing to control and reduce the consequences of human activities that are detrimental to the environment, the production and use of energy are subjected to close scrutiny. Similarly, weighing the various sources of energy involved with regard to their impacts on public health proves to be essential.

Such is the objective of the document written by Roland Masse, “Health Costs of Energy”, published on the website of Sauvons le climat :  download complete pdf document  .

We present here an overview of the findings detailed in the above-mentioned document.

Severe accidents are those that involve at least: 5 premature deaths; or 200 evacuees; or 10,000 tonnes of fossil fuel spill; or a ban on the consumption of local products. 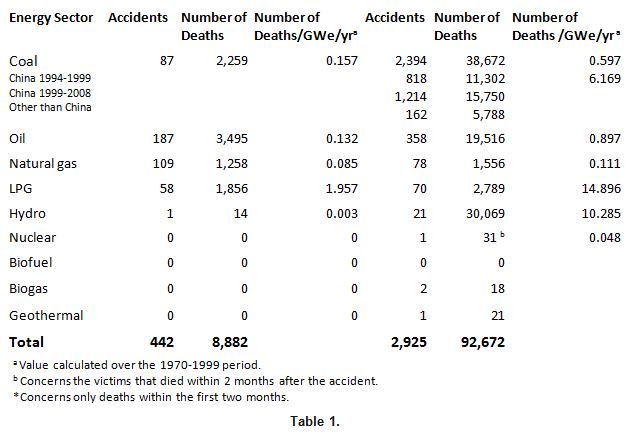 *Concerns only deaths within the first two months.

These values count direct, short-term deaths; the deferred effects, whose evaluation can involve a great deal of uncertainty, should be added to these:

Not much data is available concerning wind and photovoltaic energies; for the latter, an order of magnitude of 10-3 deaths/GWe-yr is mentioned.

2. Impacts on Health of the Production and Use of Electricity – Table 2.

European and American research studies provide an overview of the health impacts due to the different electricity production sources. Table 2 gives, for Europe, the damage suffered, expressed in life years lost per TWh after the year 2000 [5].

Table 2. These repercussions result from problems specific to each source:

- Nuclear energy induces external and internal overexposure to ionizing radiation. An excess dose can lead to cancer; their probability of occurrence has been evaluated. In those domains where the uncertainty is large, dose-effect correlations have been formalized in order to establish standards and allow estimates;

- Carbon-based energy sources, including biomass, emit CO2 causing global warming and its repercussions on health; they also release toxic compounds, which appear in a gaseous phase, such as SO2, nitrogen oxides NOx and ozone; or in a particulate phase, the particulate matter being classified according to their size (PM10 smaller than 10μm, PM2.5, ultrafine particulate matter ...); pollution due to metals must also be taken into account. The health impacts reported vary in nature: pulmonary, cardiac, vascular diseases, and cancer. An analytic assessment of the impact of each pollutant is difficult: epidemiological studies are unable to isolate individual causes, given that the pollutants in the mixture can interact and thus modify each other's effect.

- Renewable sources of energy, wind and photovoltaic, pollute essentially in the non-production phase of their life cycle when fossil fuels are used.

The importance of the frame in which society evolves is manifest at first sight. The existence of demanding standards and compliance with them protects populations as can be seen with the gap between OECD and non-OECD countries regarding the onset of accidents and their outcome.

The energy sources can be grouped in 2 categories:

A factor of 3 to 10 on the health impacts emerges between the 2 groups, to the detriment of carbon-based energies.

Thus, nuclear energy and carbon-free renewable energies emerge as the most favorable sources to efficiently limit damage on health. The convergence with their position as best environmental safeguards proves complete, with the elimination of CO2 emissions, one of the main contributors to global warming.