German Electricity and its Negative Prices

German Electricity and its Negative Prices

In this study, we discuss the results obtained from a thorough analysis of the electricity production prices displayed by Fraunhofer ISE, an "Institut für Solare Energie-systeme" on its internet site www.energy-charts.de. Our analysis whose title is "Negative Electricity Prices in Germany?"[1] is a comprehensive compilation and tight analysis of the Fraunhofer data covering all of 2017. The study also includes tutorial help for the curious reader in his/her navigation of this very rich site, were he/her to perform a personal verification of the exactitude of this study based on indisputable data provided by a German institute dedicated to the promotion of solar photovoltaics and the Energiewende policy.

On May 13, 2013, a long time ago, Jacques Percebois (CREDEN) condemned these "distorsions induced on the spot energy exchange market by the intermittent energies" and Save the Climate, on July 31, 2013, frowned on this "grotesque situation in Europe: negative electricity prices and decreasing investments!"

A negative price, for the average person as well as for the professional economist is much like an "Unidentified Financial Object", unidentified, that is, before 2008 when they were introduced via the EPEX exchange market. 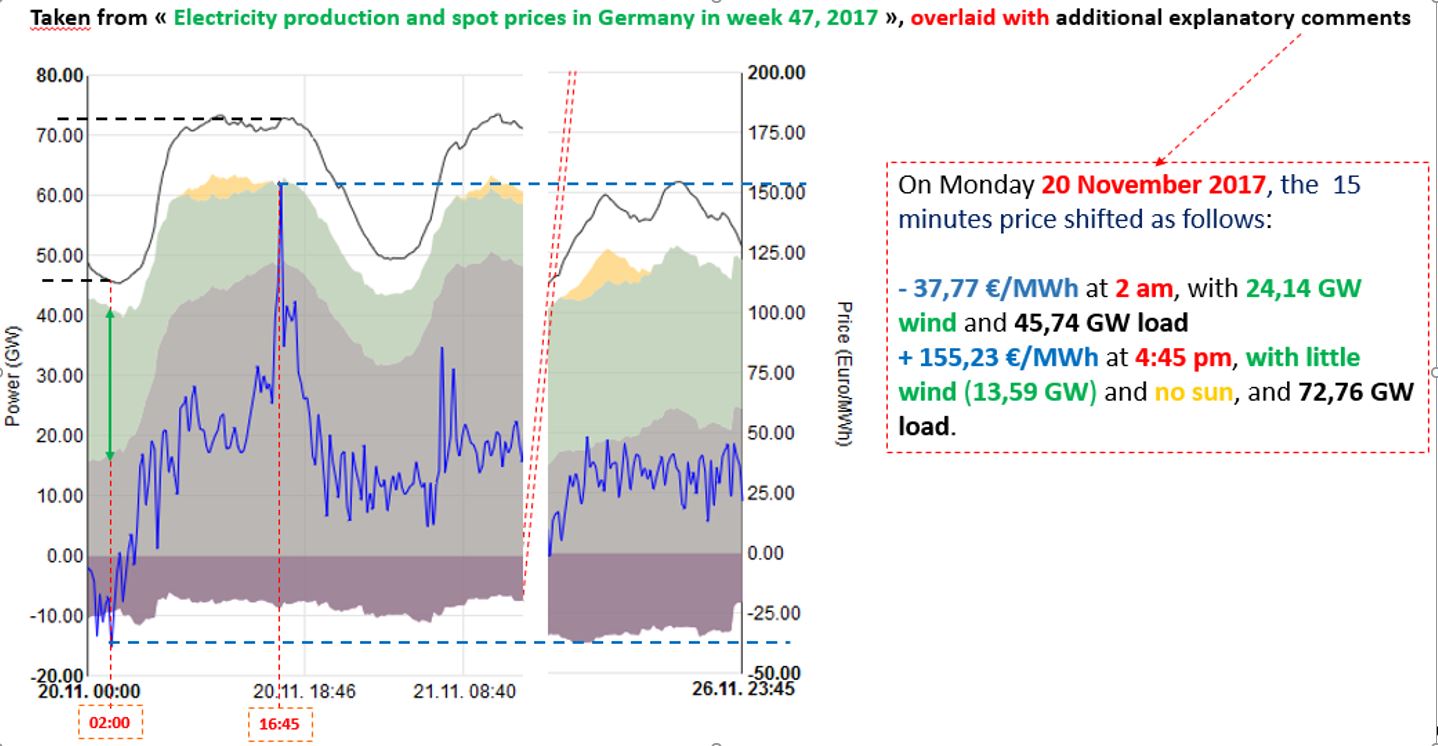 A picture being worth a thousand words, the above figure gives the beginning of an explanation: on November 20, 2017, the strong wind production (23.53 GW, shown in green) relative to an end of week-end conventional production (shown in light gray) amounting to a mere 26.07 GW, gave rise to an excess production (in spite of -7.94 GW exports shown in dark gray and no sun):

It so happens that excess production from wind and solar, with their priority access to the grid, drive the prices down to the point that it is more profitable for some conventional plants to pay a consumer for accepting to consume their production than to shoulder the cost of stopping/starting the power plant.

Why do renewable energies - not just the intermittent ones - have priority access to the grid? They do:

And why do these conventional producers make this apparently anti-economic choice? Because they can thus avoid the difficult, even problematic restarting of their plants when, a few hours later, the demand is on the rise. It is a way of keeping on standby their (gas, coal or lignite-fueled) thermal plants or, in the case of nuclear reactors, of avoiding their temporary poisoning by fission products (the so-called Xenon or Samarium effects)... In this way, they are able to guarantee the instantaneous balance of production to demand, the sine qua non condition of grid security.

Thus we are faced with an oxymoronic situation that involves two competing concepts:

It is not surprising, then that these negative price episodes become more frequent as these "fatal" energies develop. To illustrate this, we need only list the results provided by the thorough analysis of the Fraunhofer statistics for the 35 040 fifteen minutes blocks of 2017: 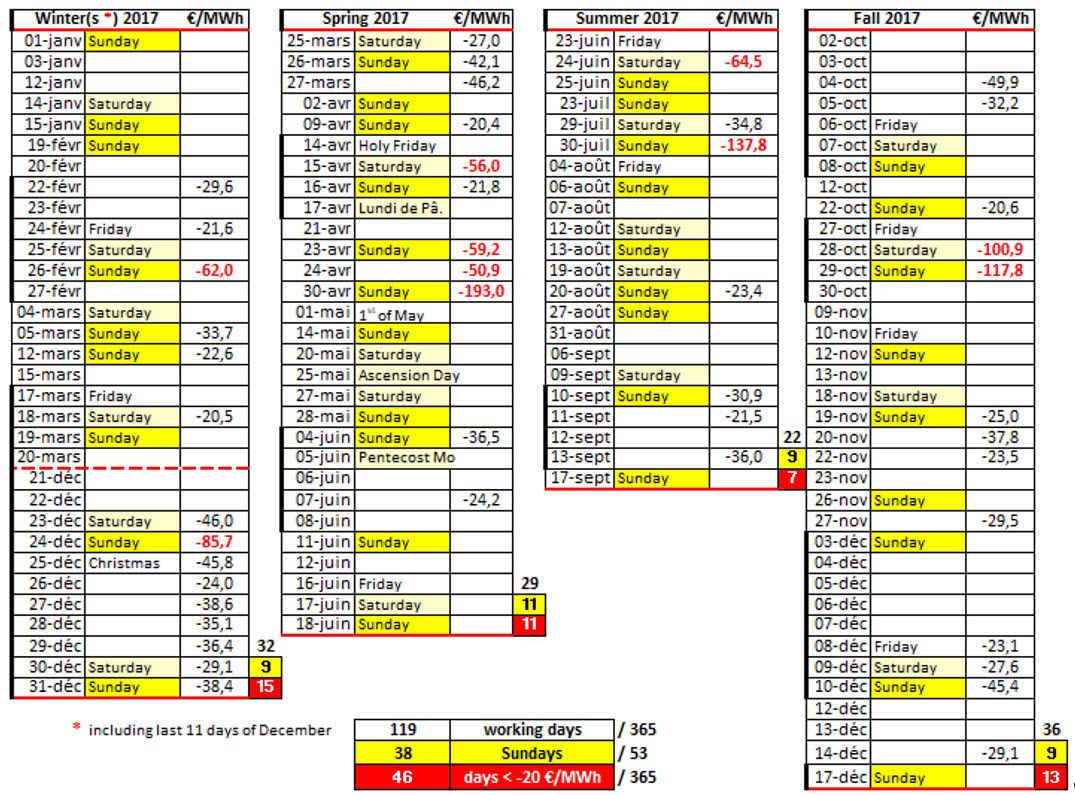 2.2. More significantly, we observe that of the 53 Sundays, 38 undergo these "anomalies", or nearly 3 "negative Sundays" every 4! And 20, i.e. more than half of these, are preceded by "negative Saturdays". Thus, there is a clear correlation with weekends, a statistics that is even more blatant when the other holidays are included, yielding a frequency of 43/58 (74%).

2.3. On the other hand, there is no noticeable seasonal sensitivity. In particular, there is a surprising regularity in the number of negative Sundays. At most, winter and fall are somewhat more exposed.

2.4. Finally, these negative prices occur both at night and in the daytime. Two circadian prevalences are significant: that of 4 pm demonstrates the importance of solar PV with its fatal aspect; the one at 11:45 pm is a probable sign that traders are adjusting their bids for the next day.

2.5. Already, however, we can state that negative prices can be ascribed both to solar in the summer when the demand is lower anyway, and to wind in the winter (always more windy).

The correlation between these negative market prices (in €/MWh) on one hand and capacity contributions (in GW) on the other hand show that the excessive production of the intermittent energies (solar in spring and summer, wind in fall and winter) relative to conventional productions does seem to be the principal cause of the wholesale price collapse.

Add to that, particularly during weekends, a reduced demand.

The case of Switzerland is even more striking: exports from Germany to Switzerland first decreased (a consequence of its nuclear power phase-out?) but they have strongly increased as of 2014 (+6.6 TWh or +57%). And in 2017 Germany imported practically no Swiss electrons (a mere 384 GWh).

This had been anticipated by a CEO of BKW International who stated that "the Swiss PHES (Pumped Hydroelectric Energy Storage, essential for storage) plants thus see their competitive edge diminish, confronted as they are to the intense development of photovoltaics in Germany..." A view that was confirmed in 2017 by Vattenfall which was justifying its restructuring program as providing "the only realistic chance to keep most of Vattenfall’s German pumped storage plants in long-term operation."

Thus, we witness the massive dumping of Germany's excess production to the neighboring countries among which some shield themselves: Poland and the Czech Republic have installed phase angle regulators, as Belgium has done to avoid being swamped at its border with the Netherlands by electricity produced in North Germany... to supply South Germany via France and Switzerland (for lack of sufficient domestic transport lines).

4.2. For all that, probably because of these internal or cross-border bottlenecks, the average prices observed in Belgium, France and Switzerland lie around +30 €/MWh as compared to the -14.08 €/MWh of Germany (according to RTE). For the time being, then, we do not see a propagation of the German negative prices to the neighboring countries, except for a few hours in the 3 countries mentioned.

5.1. A first reaction dominates, one of amazement: how can it be that, in an organized market, a product is sold not only at a loss but, more extravagant, that customers are paid to consume a product they do not need or want? From these "customers'" perspective, Germany is the land of plenty!

Not that the amounts involved are huge. As a matter of fact, it is difficult to have a clear idea of these amounts as they depend on the size of the energy blocks concerned and that is something on which we have no information. According to an unverified German source, the monetary compensation is estimated at 180 M€ for the sole year 2017, half of the amount paid for the equivalent compensation during the years 2008 to 2016 combined.

5.2. Aside from the monetary aspect, shouldn't we stress how grotesque this situation is: a country at the cutting edge of ecology which advocates resorting to renewable energies and to energy moderation, yet does not hesitate to "warm the little birdies" in order to offload its excess fossil and even nuclear power production! While the obvious solution would be to resort to the storage of electricity, an avenue that is not being traveled by Europe.

5.3. Beyond these quantitative considerations, the deceptive nature of a supposedly "free and undistorted" European market must be decried: it places dispatchable energy production, delivered as needed, in competition with inevitable and intermittent productions whose producers have already been paid!  Yet, "negative prices were first introduced in 2008 on the EPEX SPOTexchange to stimulate the flexibility of the electricity system, flexibility being considered as a major vector towards a successful energy transition, in particular to accommodate the intermittent character of the renewable energies. Negative prices, then, seen as an indicator of the flexibility of the conventional fleet". This is much like a "reversal of the proof "that can make one smile.

In reality, recurring negative prices disown this exchange system because "if the energy buyers can take advantage of these good deals to optimize their short term costs on small volumes [...] the long term message is much more negative, in particular because it deteriorates the return on investments in production plants", investments in dispatchable power plants, that is.

In other words, this market delivers price signals only for short sighted speculators. But also price counter-signals to which conventional producers react by... refraining from investing. The same conclusion is reached by "Alternatives Économiques" (a French monthly economy journal) dated 12 January 2018, in an article titled "The Destruction of the Electricity Market".

5.5.  In the short term, Europe's electricity system is living dangerously, the only meaningful price signal being formed from the subsidies attributed to the renewable energies, whether as ex-ante bonuses (the former "feed-in tariffs", still applicable) or ex-post (the new "additional remuneration" relative to the market price). That said, the risk exposure on either side of the Rhine is different:

Here, we have one of the frequently ignored causes of the high cost of electricity distributed on the other side of the Rhine river: the need to finance a double production fleet, its green component in conjunction with the famous EEG tax (threefold the French CSPE), and its conventional component whose load factor, additionally, has fallen from 54.5% to 43.7% in 15 years... Without being able to conceal the failure of this Energiewende in terms of greenhouse gas emissions reductions.

But it is the whole of Europe that is walking a tightrope, putting its electricity production at the mercy of meteorological contingencies or of technical hazards (transmission lines or production facilities). These risks are taken knowingly since it is evident that, in Germany, the forging ahead of solar and wind has not made an industrial scale iREL storage solution surface, despite regularly observed excess production and a mothballing of dispatchable production facilities: "Brand new cutting edge units [...] are operated at half their capacity leading to a loss of several million Euros per year. The owners, seeing no hope for improvement in the near term, decide to shut them down. But this is refused by the grid operator, considering that these modern units must remain open to ensure the operational reserve that can supplement insufficient renewable electricity production on some days and times in the year in Southern Germany"[4]

The German electricity system, then, is not shielded from strained circumstances, the more so when the nuclear power shutdown of the last 9.5 GW planned for 2020 becomes effective.

Neither is France's network, with its transmission operator, RTE planning to rely on the support of its neighbors (Germany first)...

[2]     In France, it is EDF (except, marginally, the local distribution companies) that is submitted to the "purchasing obligation" under provisions of the legislation « Loi n° 2000-108 du 10 février 2000 relative à la modernisation et au développement du service public de l'électricité ».

[3]     Note that the "historical nuclear energy" sale price imposed on EDF to the benefit of its competitors is 42 €/MWh.