This priority is mandatory because we are confronted with a cumulative phenomenon: that which is not avoided today will be harder and more expensive to compensate for in the future. The first imperative is to reduce the CO2 emissions from fossil fuels, and simultaneously the CH4 and N2O emissions. Efficient action within the next 15 years is necessary and must be based on existing mature and competitive technologies. While a long-term vision extending to 2050 is relevant for research orientations, it is not for mid-term programming: it may lead to cruel failures.

The LTECV[1] is inefficient (along with the PPE) because it sets rigid objectives for 2030 relative to 2012, namely: reducing the final and primary energy consumption by 20% and 30% respectively; increasing renewable energies to 32% of the final energy consumption; renovating 500 000 homes per year; reducing the contribution to electricity generation of carbon-free nuclear power from 75% to 50% by 2025. These goals, along with their inconsistencies, clearly dominate today's political choices, over and above the reduction of greenhouse gas (GHG) emissions within the best economic and social conditions.

This article can be downloaded (pdf format) : follow this link

The results published in January 2018 by the French Government Energy Department in its monitoring of the national low carbon strategy (SNBC[2]) show that the 15.3% decline of French GHG emissions since 1990 is due mainly to the deployment of carbon-free nuclear power and to the unfortunate decline of the country's industrial sector. Recent evolution shows that none of the LTECV's objectives are on the right track, with an increase of emissions in 2016 and 2017. The overshoots are large relative to the SNBC targets in the building sector (+11%) and in the transportation sector (+6%), the two combined representing half of France's GHG emissions and 67 % of its CO2 emissions. The remainder is mainly due to agriculture which makes no progress and to the industrial sector where renewed growth would be desirable.  Today’s CO2 emissions are 17% above the 2023 goal, which is out of range.

According to the CGDD[3], energy consumption in both building sectors (residential and tertiary) and in the transportation sector, these combined accounting for two thirds of France's CO2 emissions, continues to increase while the LTECV considers their decline to be a priority. 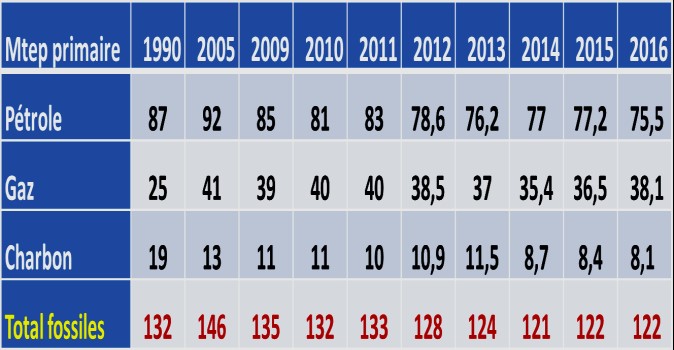 Yet investments and, above all, household expenses are directed towards wind power and solar photovoltaics (PV). France's electricity mix being essentially carbon-free, the benefit for the climate is negligible. The SNBC points out that in a total 6.7 billion € financial aid in 2016, 3.5 are dedicated to wind turbines and PV panels. In 2017 these figures reach 9 and 5.6 billion € respectively. Yet, because their production is intermittent, they must be backed up with complementary fossil-fueled power plants. The cumulative financial aid paid out for wind and PV will reach 26 billion € end of 2018 and a total of 121 billion € are in the pipeline from contracts signed before the end of 2017.This cost will weigh on households and industry (SMBs and tertiary sector).

Even more disturbing, SNBC admits to expecting a stabilization of the electricity sector emissions despite a considerable extension of wind power and PV put forward by the government for the next 10 years (factor 2 yearly average). The cost of this extension has still not been properly evaluated and presented to the parliament. 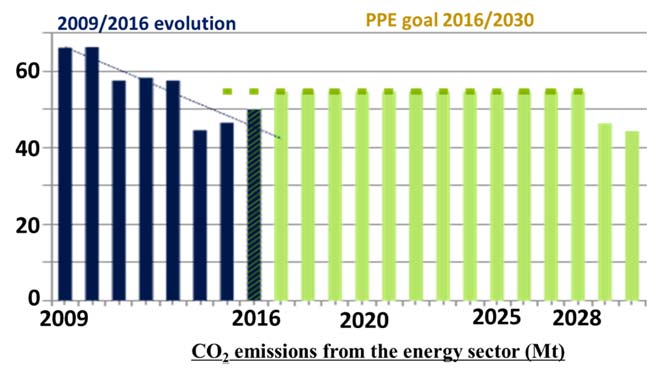 The National Low Carbon Strategy's monitoring confirms that the problem lies elsewhere, in transportation (based almost entirely on oil), and residential and tertiary buildings (heated mostly with natural gas, 42 %, and oil, 12 %).

Advocating a new orientation for the PPE

Some of the LTECV and the 2016/2023 PPE objectives are already out of reach, as has been corroborated by the government. Imposing to the 2018/2028 PPE the LTECV's constraining and unreachable objectives, only because such is the law, would weaken the energy sectors, EDF[5] especially. It would be very risky to build the PPE without previously revisiting the LTECV objectives toward a pragmatic approach.

SLC proposes to reorient the French energy policy exclusively in favor of the climate, within the best economic and social conditions, without ideology;

SLC states its mid-term strategy based on proven technologies[6] and, for the longer term extending to 2050[7], in a prospective manner.

The transportation sector (41% of the CO2 emissions).

The transition to electricity powered transportation (the transport sector's emissions are unchanged since 2010) must be a nationally supported program run with the industry, including battery development. The electricity supply sector must champion this ambition (competitiveness, reliability, strong grid, carbon content reduction). Both electric vehicles and rechargeable hybrid vehicles should come first. Second generation bio fuels will contribute little in the next ten years, the technology is not yet proven.

However, optimizing internal combustion engines will remain of interest over time if only for the automobile industry's exports (to countries with poor grid connections or whose electricity is carbon intensive).

A societal transformation of mobility must be thought out, but without forgetting the numerous and scattered populations living at the outskirts of cities or in a rural environment, where public transportation is nonexistent or insufficient.

The residential and tertiary sector (24% of the CO2 emissions).

The electric power sector (6% to 8% of the CO2 emissions)

From 2008 to 2018 inclusive, 26 billion € will have been levied through a tax, the CSPE[8], strangely mainly on carbon-free electricity, to cover the public support to wind and solar energies (that deploy nearly 100 % imported devices). This corresponds to 300 € per tonne of CO2 which has been avoided, 30 times the CO2 cost on the European market. It has already increased the price of electricity by 28% (INSEE[9]). Modifying the electric power mix by reducing the contribution of carbon-free nuclear power will have very little impact on the GHG emissions. It is neither urgent nor necessary.

Maintaining the nuclear fleet (including the EPR and the Fessenheim[10] plants) is vital if France is to keep a major asset, a carbon-free and load tracking electricity mix, without needing over-investments. Germany, after a 200 billion € investment for 101 GW of intermittent renewable electric power to replace 10 GW of nuclear plants, emits as much CO2 as it did in 2009. And its electricity for households is 80% more expensive! The PPE should be limited to reducing the sector's GHG emissions at controlled cost.

We must protect ourselves from the weakening of European networks resulting from a non-concerted development of intermittent renewable energies, limited European grid interconnections, generally simultaneous intermittent productions, and the forecasted decommissioning of several nuclear and coal facilities.

Wind and photo-voltaic power generation are mature technologies and should comply with market obligations (rapid limitation of all public support, contribution to load following and suppression of access priority).

This sector is the poor relative of the LTECV. Its growth has been insignificant in recent years due to the (justified) freeze on first generation bio-fuels, the slow evolution concerning solid biomass, and the curb put on heat pumps and thermal solar

A gain larger than 3% in this sector within the next 10 years is unlikely.

France is one of the OECD countries with the best record thanks to its nuclear and hydro power. However, the LTECV and the 2016/2023 PPE set multiple constraining objectives that aim at limiting the contribution of nuclear power (decreasing its contribution from 75% to 50%), although it does not emit CO2, while allocating considerable monetary advantages (that lead to speculation) to solar and wind farms, which deploy mostly imported devices. The 2020 and 2030 targets for the development of renewable energies are not economically sustainable and would coerce drastic and expensive energy consumption reductions in the building and transportation sectors.

The constraints ordained and the associated costs, then, will weigh on households and industry (mostly SMBs), while the State's credibility will be depleted by a very foreseeable series of failures.

At the European level, true competition must be restored in the electricity sector, by eliminating aid for mature technologies, objects of speculation.

[4]     Translator's note: SOeS is a newsletter from the statistics section of the government energy department.

[10]     The Fessenheim plant avoids the emission of 6 million tonnes CO2 per year.