Can El Hierro be 100 % electric-renewable?

The first version of Negatep was presented in 2007, continuing from an initial step called "phasing out fossils" presented in 2003 during the National Debate on Energy in France whose purpose was to prepare the 2005 energy roadmap legislation. This defined four main objectives for the French energy policy:

During this debate, the factor 4 was put forward, an objective that all developed countries should set for themselves, a division by 4 of their carbon dioxide emissions by 2050 relative to 1990 taken as the reference year.

The term "Negatep" alias "Negatoe" is not neutral. Indeed, it is the energy from fossil fuels, symbolized by oil and the tonne of oil equivalent (toe) that has to be restrained. This implies energy conservation but also the replacement, in so far as possible, of fossil fuels to generate both direct heat and electricity with energy sources that do not emit carbon dioxide.

In its Negatoe 2011 version, this scenario was presented by Save the Climate at the National Debate on the Energy Transition (DNTE - Débat National sur la Transition Energétique) that was held from November 2012 to mid 2013 in France.

While an initial step has been taken towards fossil phase out in France with the first energy transition of 1980-1990 and the replacement of coal and heavy oil by nuclear power for the generation of electricity, we must proceed further by replacing natural gas (mostly for heat) and oil (for mobility) with heat renewables (including biomass), with carbon free electricity from nuclear power (in continuity with the first energy transition) as well as with electric renewables, some of these being limited, however by their intermittent and variable production.

During the debate, the French government gave clear indications of its preconceptions and orientations, with a significant reduction of nuclear power as its goal, contrary to Negatoe's recommendations. This was officially confirmed with the legislation: "Loi sur la transition énergétique pour la croissance verte" (Law on the energy transition and green development) approved and passed by parliament in July 2014, published in the Journal Officiel (official journal) in August 2015.

But this law, by sometimes confusing the goals reaffirmed above and some of the means to reach them, goes beyond and engages specific actions. Thus, it puts forward, for instance:

Such measures are not directly related to the fundamental goal of reducing carbon dioxide emissions and can, without being detrimental to the goal, not concern it directly or, even, be counterproductive.

Yet, if the decarbonation goal of our economy is to be reached, the large amounts of fossil energy consumed in transportation and buildings will have to be replaced progressively with carbon free electricity.

We have carefully examined the various means available to produce carbon free electricity while taking into account the stringent technical constraints that have to be complied with if a reliable and good quality electricity is to be provided. Because the intermittency of wind and photovoltaic power has to be overcome, the least costly power fleets allocate a large share to nuclear production and will continue to do so. That is how electric power generation will best preserve consumer purchasing power and will provide industry with a competitive edge relative to foreign competition.

We propose here a translation of the full Negatep 2017 scenario. It does not conform to the 2015 legislation where the specific nuclear issue is concerned but it has its full place in the debate, in that it returns to the primary objective: reducing carbon dioxide emissions by a factor 4.

Today, fossil fuel consumption to satisfy primary energy needs is close to 120 Mtoe. It would easily reach 160 Mtoe in 2050 if current errors were to be continued, with CO2 emissions following the trend.

The division by about 4 of these CO2 emissions relative to the present and by more than 4 relative to 1990, implies:

The progression of electricity generating renewables is limited: indeed, concerning hydropower, the principal electrical renewable today, practically all has already been done on land and the new renewables (wind, sun) stumble over their variability.

So we find a more than 50 % increase of nuclear electricity. But as a lot of uncertainties remain about the limitation of uses, and the possibilities of renewables, we consider nuclear power as an adjustment term that may vary above or below this value. 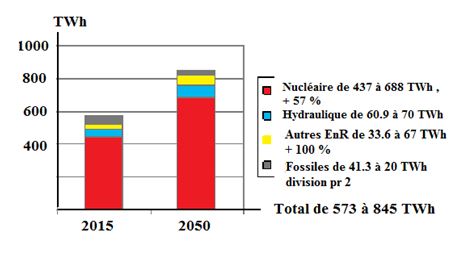 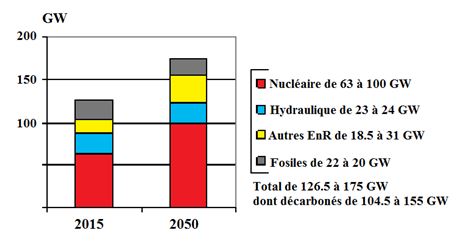 Observations show that any massively renewable scenario will require considerable investments, in particular in the electricity sector, with an installed capacity that is necessarily three to four times larger than peak demand, and with no notable benefit for the reduction of our country's CO2 emissions.